PLC Next Store Reveal Show on the SPS IPC 2018

Together with a team at NSYNK and lead agency Atelier Markgraph I created a live show where we placed the moderators in virtual envoirenments to give the audience real world use case scenarios and to show how the app stores customizable software solutions can be used in many different projects. With the realse show the store is now available for the whole automation industry.

To illustrate the use cases of the available apps we placed the moderators in different virtual scenarios to explain how the store and its applications work in a production facility, a pumping station and navigating a maritime giant. By adding infographics and explaining elements to the true-to-life scenes, we gave the audience an exact idea of usage and actual meaning of the PLC next Store.

To figure out which compositions and camera movements fit the best we build a testing environment in our studio to simulate the stage scenario. With that we were able to answer all the technical questions and find out difficulties like: How can we archive the best camera tracking? Does the color keying with petrol colored greenscreen work? What kind of camera is suitable for a live rendered scenario? How can we precisely track the camera in the room while it is operated by a camera man?

This is why we had to build a test surrounding with a proto-greenscreen, our TV as the LED and the first prototype of our tracking marker for the camera. Out of the simulation results we decided to 3D print our marker with six changeable arms, thereon one LED at the end of each. Different heights and length make it more easy for the tracking system to place the marker in the room. We worked out technical and visual issues in our studio, nevertheless some things can only be adjusted at the fair.

The presenter is standing in front of a greenscreen, which functions as a virtual extension for various scenarios. The camera is stacked with the marker tracked by 8 infrared cameras mounted to the ceiling. This enables camera movement in the real and virtual world. Because of knowing where the presenter is relevant to the camera we were able to not even build a world behind the presenter but to place specific objects in front of him.

The camera is also equipped with two small screens, one supports the cameraman filming and one the presenter to interact more easy in the virtual space. Our custom tool in vvvv allows us to use Unity 3D as our rendering engine for polish-rendered scenes. Tracking data is managed with our vvvv software as well. We were lucky to direct the show almost infront of the greenscreen, which simplified operating in sync with the presenter. 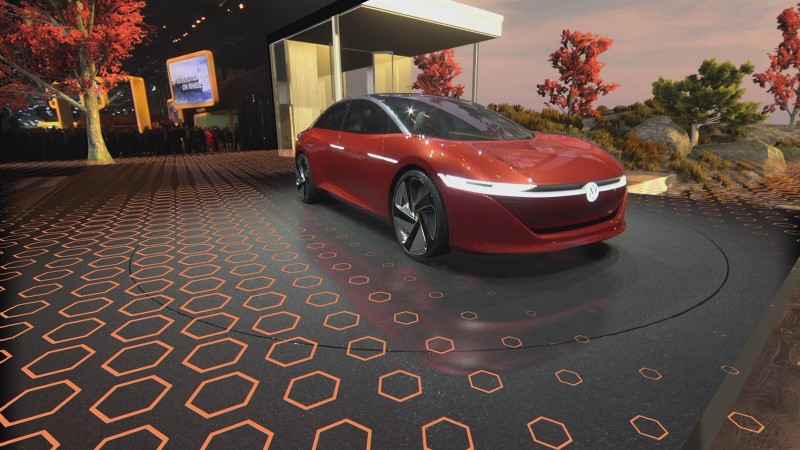